For most of my life I have been afraid of deep water. You know the kind of deepness that makes the water look dark and you can’t see beyond your feet – that has always terrified me. Deep lakes – NO. Deep rivers – NO. At the beach, swim further from shore than I can stand – NO!

I question how I even convinced myself to try scuba diving…

Snorkeling is my most favourite pastimes. I’ll take every chance to snorkel, if the conditions are right! It’s a very relaxing activity that doesn’t require a lot of skill – kick with the fins and point your body in the direction you want to go – best of all, it all happens near the surface of the water, often in shallow waters.

We tried this out at Sunrise Point, where you could literally walk out into the water right off the beach and be surrounded by beautiful, colourful coral and tropical fish. Something inside me was saying, can I go deeper?

Between Sunrise Point and our humble abode on the otherside of the island, we passed a handful of dive shops. The main dive shop, Oceans 5, was right in front of the pier – the first thing you see when you come off the boat. All I wanted to do was try out diving, at this stage I wasn’t at all interested in pursuing the Open Water Course.

We enquired at the desk and the entire team were so welcoming and friendly. Already we had a good feeling about the dive instructors here. The price for a single discovery dive was very reasonable to us – including the pre-dive training session in the pool.

Everything was perfect and we set it up for the next day. Three of us, Louise, Claire and myself were very excited to take the plunge!

We met our dive instructor, Matt, who introduced us to a fourth student, Birgit. We all got kitted up with a wetsuit and dive equipment, then jumped into the pool for confined water training. I was so comfortable in the water with all the gear and taking that first breath under the water was frightening but exhilarating. Breathing via the regulator is slightly different as you are drawing air from a pressurised tank. There is a diaphragm in the regulator that is pulled back as you breathe in, this needs a ever so slightly stronger than usual inhale to ensure that the air comes through. This becomes second-nature after some time underwater.

Buoyancy is a huge deal. The less you exert yourself, the more energy you will have to enjoy your dive, resulting in better controlled breathing, which in turn conserves more air. The buoyancy control device (BCD) allows you to control your buoyancy, by inflation or deflation (via your air tank). I had a very good control of my buoyancy and the assistant dive instructor, Dave, was showing me how to meditate underwater, cross-legged and suspended in mid-water. That was quite a surreal feeling. Once I was comfortable with buoyant meditation, we moved onto inverted-vertical suspension. Now, that was fun!

After the confined water training was over, we grabbed new tanks and head straight out onto the boat. Today, we’d go to a wreck just off Gili Meno, descend to 12 metres and dive until one of us reached 70bar (the minimum limit before needing to start a controlled ascent). 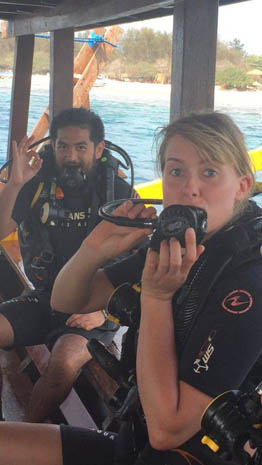 We sat on the edge of the boat and dropped into the water backwards. One hand on the regulator, one on the back of the head to hold the mask. We grouped on the bottom, approximately five metres below the surface. From here we could see the sand drop off into a shelf that became increasingly deeper and darker. At this point, I was getting nervous. Although I could control my buoyancy and follow all the instructions in the pool, this was the open water – this was the great deep blue! 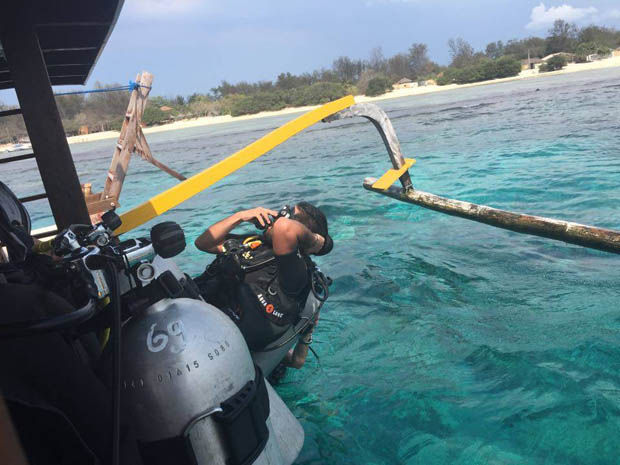 Together, we descended very slowly. As we swam over the shelf, we could follow the inclining sandy bottom down to the ship wreck. Luckily for us, the visibility was up to 15-20 metres! Breathing under the water was incredible, but I was very conscious to conserve as much air as possible to prolong the dive.

As expected, schools of tropical fish swam past us, as well as a few turtles. We were advised to look out for a certain species of Groper, if you saw them, you might see a turtle nearby – these fish consume the excrement of turtles. We saw a scorpion fish, very hard to spot and highly dangerous!

One of us in the group reached 70bar, so it was time to make a safety stop. We slowly ascend to five metres and stop there for three minutes. This allows excess nitrogen in our blood to dissolve away. To ensure we were safe to break the surface, our instructor released a floating signal device to alert boats above that divers were below.

Our boat came around to pick us up and we hopped back onto the boat. The other divers on board who knew that we were all first time divers were very impressed with us. They were saying that we looked like mermaids (merman for me, I guess), so natural under the water. 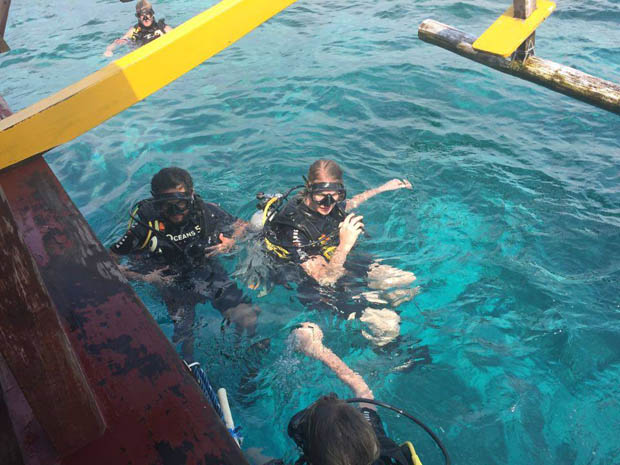 Back at the dive shop, we had a debrief. There, we were invited to continue with the Open Water Course, adding only three more dives over two and a half days. Before I knew what happened, I opened my big mouth and said “Yes, I’m in!“ They managed to squeeze the two and a half day programme into just two days, so that Louise and I could head back to Bali when we planned.

The next few days were amazing. I felt like I was back at school! Each morning, we would get up early, grab our brekky at the hotel cafe and ride our bicycles to the dive shop by 8:00AM. The morning training would usually consist of a training video then confined water training in the pool.

There was a fitness and swimming test to complete, too. The two girls in our group were strong swimmers and they laughed off the 200 metres we had to complete. Being the only guy in the group, I didn’t want to lag too far behind them so I pushed myself so hard to stay on their tails. The 200 metre swim was followed by a 10 minute unaided float (we could tread water or simply float). We passed with flying colours, and I saw the colours of my breakfast straight after.

One of our next dives was straight from the shore, around 4PM in the afternoon. At first the visibility was quite good, around 20-25 metres. Then halfway through the dive, the visibility reduced significantly and we lost our assistant dive instructor, Dave. For one minute we waited and looked for him. After no sign from Dave, we had to ascend and rejoin him on the surface. That was the first time our instructor had ever lost an assistant under water!

When we did finally meet Dave on the surface, we were all treated to an amazing fire-bursting sunset, as we paddled back in to shore.