Bolinao, Philippines. What does it evoke in you? Certainly, for me it does not conjure any ideas of beach fare. BUT, lo and behold, you might be in for the ride of your life! Our journey may have possibly been the longest ever. And despite only realistically having an overnight and a half stay, we set off on the arduous adventure to bring the sand beneath our down-trodden feet (hobbit feet).

After nearly an entire year without your brother, you get a bit homesick.

David, my youngest and only brother (five years separate us), had already been some weeks in the Philippines before I arrived. I was über-excited to meet up with him, after nearly an entire year without your brother, you get a bit homesick. I managed to have lunch with him, then we set off for our cousins’ home just outside of Manila proper, Novaliches, Quezon City. 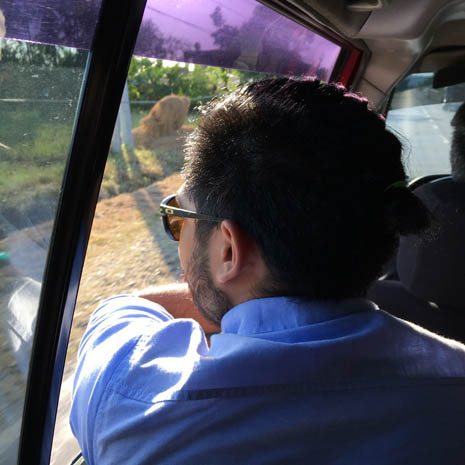 That journey alone was nearly two hours, bumper to bumper traffic. The slow pace of this congested city is at times (most of the time) painful and agonising. Its like slowly drawing blood.

We jumped into the familiar red van, the same one we toured around in back in 2013. A roadtrip was before us.

As we reached Brgy. Capri, we dropped off our backpacks. Our cousin Angel and her partner, Kris, drove us another 2hours outside of QC, to our other cousins’ home in San Isidro, Pampanga. There, we stayed the night – weary and zombie-like.

The next day, everyone was together : all the cousins, all the babies. We jumped into the familiar red van, the same one we toured around in back in 2013. A roadtrip was before us. Just shy of 200km, we estimated our arrival time within 3-4 hours. 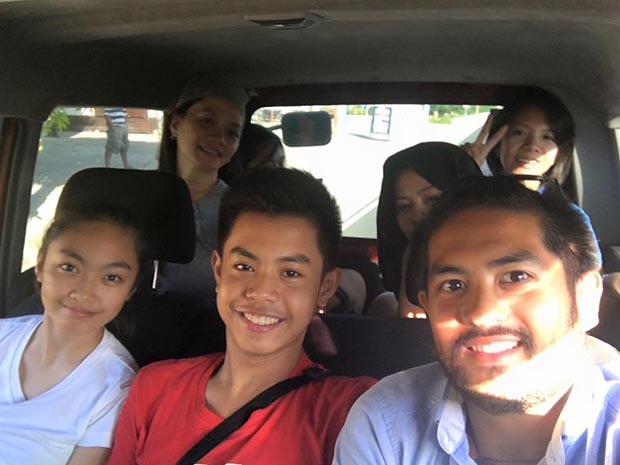 3 hours into the trip, we went off road and it was another two hours until we reached our destination: Patar Beach, Bolinao, Pangasinan, Philippines. 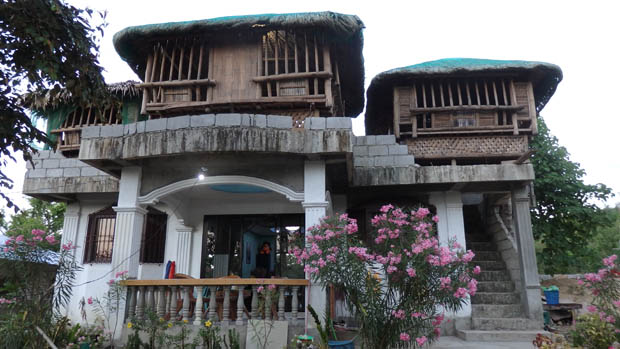 Our accomodation was large and accommodating. That night was feastful and the Red Horse flowed freely. Loose tongues spoke whatever the mind thought, loud voices shouted unnecessarily to those seated immediately beside – but we were all together and no-one was going to quash our fun and bonding. 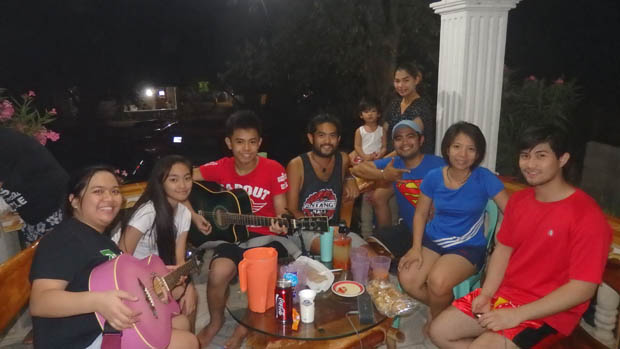 The boys (lasing) were put to bed and the night blurred into the morning. There was an alarm at 5am, a handful rose to visit the market (palenke). I didn’t feel well, probably blocked myself up with a kilo of grilled pork (inihaw ng baboy), but I managed to drag my sorry ass out of bed and down to the beach for a swim.

I was digging a hole near the shore. Erin was building the wall around me. Everyone then joined in to fortify the wall, as I continued to excavate, deepening and widening the growing pool. We managed to survive several strong waves, but it required our consistent and concerted effort to maintain the integrity of the structure. 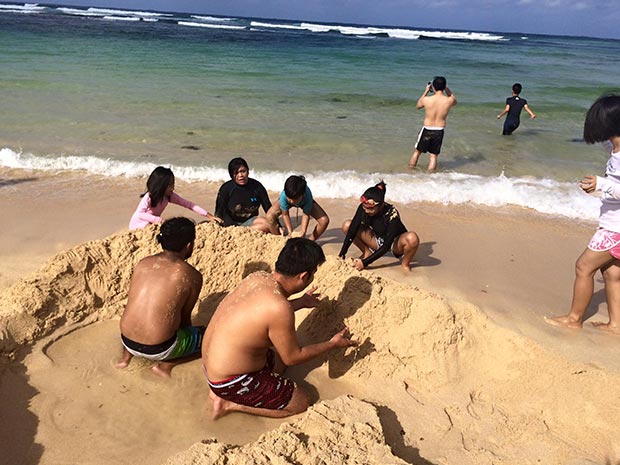 I wanted to bury the smallest child, which happened to be Erin. 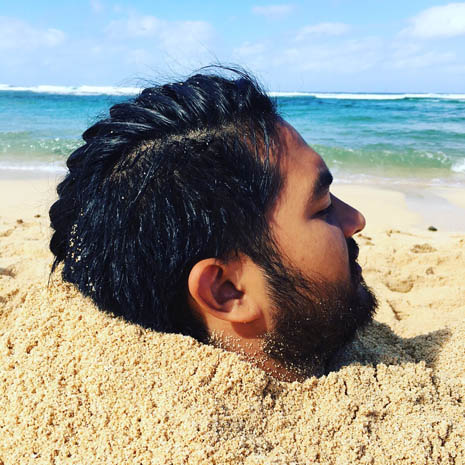 On the beach, like in other Asian places, vendors come up to you and give you the hard sell. The vendor I chose to make a purchase from was the cutest, and probably youngest, vendor I have ever met. Her name is Laika. She is only five years old. She lives on the main road near the beach and wanders down to meet visitors all on her own. She carries a basket on her head, carrying ornate shell decorations – likely made by her or someone in her family. How could you not be a patron and buy something from this smiling bundle of joy!? 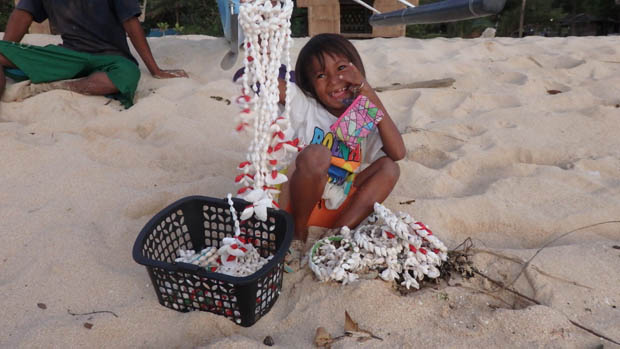 I held him up and asked “Do you want to walk in the sand?”, to which he responded “Ayoko” in the softest voice you’ll ever hear!

Speaking of bundles of joy! Patriss, the bunso of Kuya Bam, pictured below, was feeling ill. He was so silent and well-behaved, it was simply adorable. I was playing with him on the sand, he was sitting in my lap. I held him up and asked “Do you want to walk in the sand?”, to which he responded “Ayoko” in the softest voice you’ll ever hear! It means, “I don’t want” in tagalog. As I lowered his feet to the sand, he bent his legs so that his feet would not touch the sand. Oh man, that was the cutest thing ever! 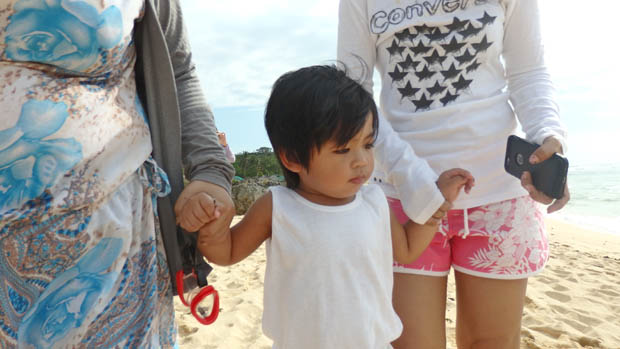 When it was time to leave, of course we didn’t. In the Philippines, the clock is used more as a guide, than a rule!

The drive back to Pampanga took seven hours. Seven hours. SEVEN HOURS! I felt really bad for Perry who was driving for so long. Then from their house, Perry drove another hour and a half home to Novaliches.

But despite the enormous distances we traveled, we were all together. We all ate together and drank together. We sang songs all night together. We swam in the ocean and built sand castle walls together. Such fond memories we made together.

For most of my life I have been afraid of...